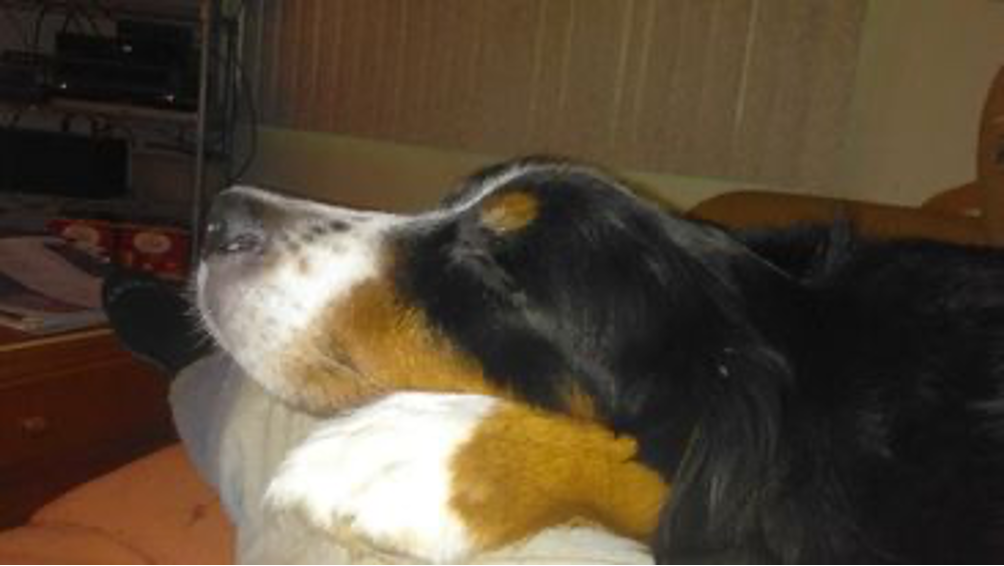 Sarge arrived at my home on Saturday May 30, 2018 (as a Rescue) and one day later he was sleeping with his head on my leg.  He filled my home with gentle Berner Love.  He passed away on April 22nd, 2022 at the age of 11 years and 2 months.  He loved to sleep at the far end of my sofa and would hold my feet with his paws.  It has taken me these many weeks so that I could finally write these words to say, If you get the chance to RESCUE a DOG, please DO IT. 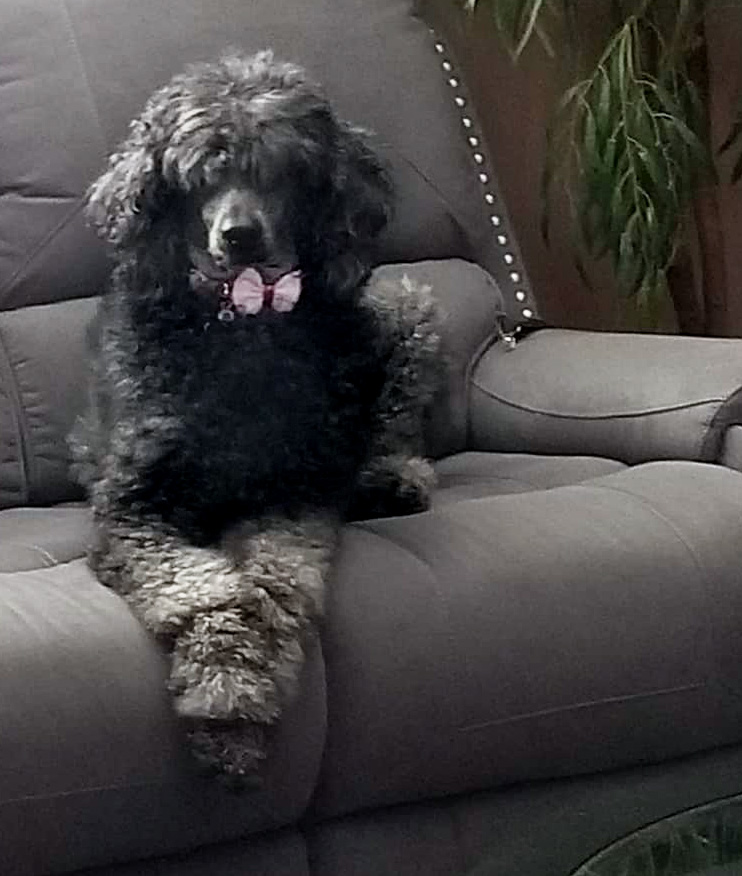 She was my shadow and had already been there for me four times when my sugar level dropped. Every day, she would sit across the room and would follow me with her eyes to make sure I am ok. Funny thing she trained Aphrodite to do the same. I will miss her

Samson was rescued from Howard County Animal Control. He was found running the streets and was originally named “Ridgely” after the road he was found on. We adopted Samson in early April. When we picked him up and he weighed in at 66lbs. We were told he was 8 years old. Samson quickly grew and by September weighed 115lbs. I worked with Samson all summer teaching him how to sit, stay, come and heal. I never expected him to form such a protective bond with Mike so quickly. After a year at DOTC, and Samson not passing the first lesson of the first class, we were asked to keep Samson at home so that his bond with Mike could continue to grow. Samson became extremely gentle with Mike and followed him everywhere. If Mike lost his balance and fell, Samson would be there for him to use to get up. Mike passed away in January 2020 and I think Samson felt very lost without his human. Samson passed away, a year later, February 22, 2021 from the same disease his human had.

Stormy
March 1, 2011 – April 29, 2020
On April 29, one of my cattle dogs, Stormy, lost her battle with lymphoma. Stormy had such a strong presence about her. She was alpa to the core. She was the watchdog. She never let anyone pass in front of our house without an alert. She was not friendly to other dogs at all, yet she did accept our big male chessie Duke. She would jump up on his shoulder to play with him. If she didn’t know you, she would bark and be wary, but if she liked you, she would skip to meet you and give you kisses. When Blue and Stormy were young and in obedience training, my daughter Annah trained Stormy. Whenever Stormy did something right, Annah would say “Good Job Stormy!” Over time, that became a saying in our house. Whenever anybody, human or canine, did something good, they would get a hearty “Good Job Stormy!”.  We use it all the time, everywhere. We get some funny looks sometimes, and then we tell the story. It will always be a legacy for Stormy.
Over the last year Stormy had many medical issues. She was diagnosed with diabetes in March 2019, and went on insulin twice a day. Last October she got really sick, and after a week of vet visits, ER vet visits, and testing, they determined she had a bowel blockage. She survived the emergency surgery, and peritonitis, and 12 days in intensive care. Once she came home she developed huge abscesses on her shoulders from the fluids they were giving her, which created huge wounds across her shoulders, which I treated twice a day for over a month until they healed. And a little over two months ago she was diagnosed with lymphoma.
And through all of this she never complained, or growled at anyone treating her. She did her watchdog duties, and loved to lay in the sunshine. She wanted to go outside to play with her toy, and was always ready for a car ride. She was a tough and loyal companion. My heart aches for her, and my house is too empty. It doesn’t matter how many dogs you have, when one of them is gone, there is a huge hole. I hope she has met some old companions, and made some new friends. Until we meet again, “Good Job Stormy”. 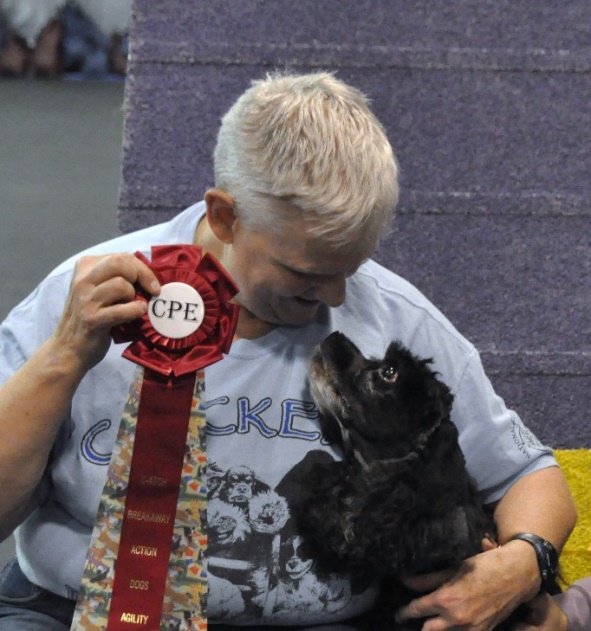 Bizzmar Hamlet (Rerun)
9/9/1999 – 8/25/2015
Rerun was only supposed to stay 1 week, when I picked him up at 11 months of age.  He did a lot more that I thought he would, in the areas of rally and agility.  Below is the list of highest titles in each activity that he earned during the 15 years I had him.  In 2008, he was ranked 13th in the top 25 cockers with placements in Rally Advanced and Excellent.  Although he never got a tracking title or a nosework title, he enjoyed those activities as well.  He will be missed.   AKC – rally, obedience & agility Bizmar Hamlet CD, RAE2, AX, AXJ, NF, AXP, AJP, NXP UKC – rally, obedience & agility UCD, UAG1, URO3 Bizzmar Hamlet CPE agility C-ATCH2 Bizzmar Hamlet ChJU, ChST, ChCL, ChFH, ChWC NADAC agility Bizzmar Hamlet S-NAC, O-NCC, NJC-200, S-TN-N, O-TG-N, O-WV-N, HP-N, Novice Versatility, 1000 Lifetime Points USDAA agility Bizzmar Hamlet SPJ 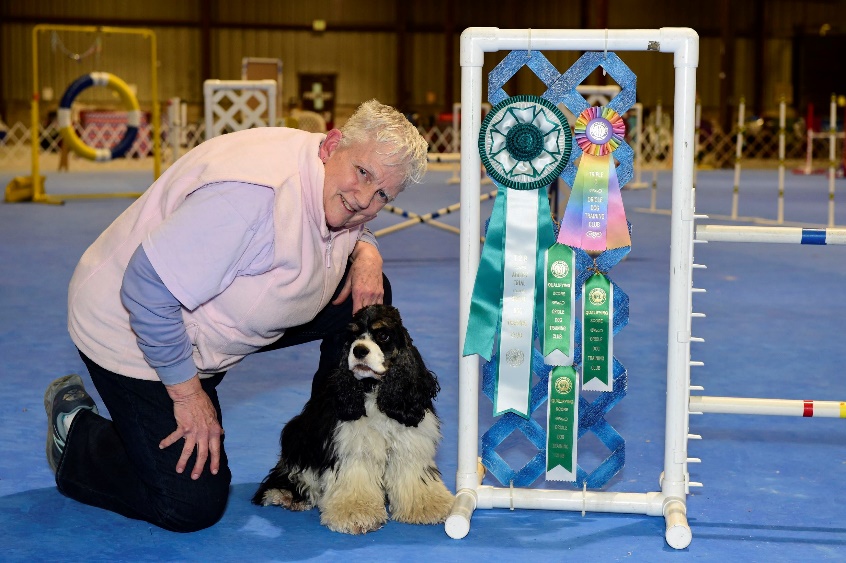 This memorial wall is dedicated to Sascha Dodgetta von der Misty Ridge CDX PCDX RM4 RAE13 OAP OJP CGCA CGCU TKP beloved friend, companion and teammate of DOTC President, Gail Phillips (2016 to present). Sascha crossed the Rainbow Bridge on 24 August 2018. This wall will serve to celebrate and memorialize our dearly loved and missed companions who have gone ahead and crossed the Rainbow Bridge. Until we meet again…